With the SynchMotionTM Technology, SK Single Axis Robots will be more suitable for industries which require higher speeds and quieter performance. 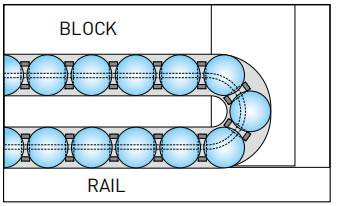 Noise Test
Incorporating both SynchMotionTMTechnology and Tangent Circulation Technology, the noise reduction is about 3~5 dB during operation. 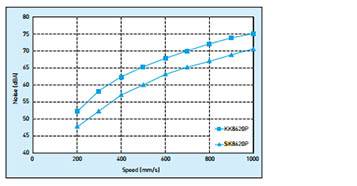 Life Calculations
1. Service Life
Under repeated stress between the raceway and the rolling elements, pitting and flaking will occur as it reaches fatigue failure. The service life of the SK Single Axis Robot is defined as the distanced traveled before any failure of the raceway or rolling elements appear.

2. Nominal Life (L) The service life varies greatly even when the SK units are manufactured in the same way or operated under the same conditions. Forthis reason, nominal life is used as the criteria for predicting the service life of a SKunit. 3. Nominal Life Calculation The calculating formulas are divided into two parts, quideway and ballscrew. The smaller of the two values would be the recommended nominal life of the SK unit. Nominal life formulas for both the quideway and ballscrew depend on several parameters as shown below.